A Day to Remember

Everyone has days in the year that are memorable.  Sometimes they are Birthdays or Anniversaries, sometimes events of significant achievement or even events of major impact—good or bad.  For the family of Bill Cramsie, 10 April 1944 was a date seared with pain in their minds.  Bill was one of those boys and young men that everyone loved.  After a year at the West Point prep school and then three more years at the Academy, he was a man that was very widely admired and respected.  He graduated from a class of heroes and was the first of that remarkable class to be killed in action. 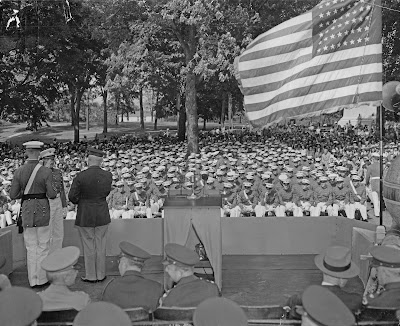 At his graduation ceremonies in June of 1943, Bill and his fellow aviators received their wings and their appointments to the Army Air Corps from Hap Arnold, already a legend in military circles and in the post-war years as the "founder" of the U.S. Air Force as a separate branch of the U.S. Military Community.  It was a day that Bill had dreamed about for many years and one that did not happen without a great deal of effort and perseverance.  His mother Idella and sister Ruth were in the audience at scenic Trophy Point on that crowning day of achievement.

On the 10th of April 1944, less than a year later, Bill became one of those many thousands of heroes we remember and honor from World War II.  He and his crew of an A-20 Havoc bomber were to become the first KIA combat casualties of the 416th Bomb Group in its distinguished service.  One of many, but to those who knew him well one that touched the soul.  The plane and crew were never recovered, though apparently not more that a few miles from land when they went down in Bradwell Bay.  The memory of Bill Cramsie will live on for generations to come, thanks to his West Point class ring that appeared as a "message in a bottle".  That was just the first of many messages to follow.  One day, as technology advances, we may very well witness the discovery of 43-9699 and perhaps the remains of its crew.  With the lowest seasonal tides in Bradwell Bay converging with that very date, it is a distinct possibility that the sands will eventually give up their secret.  Recovering Bill Cramsie would be a day to remember for sure.

From a Ring to an Archive

Those who have followed the First to Fall story from the beginning of this blog in 2008 will know how the West Point class ring of William Edward Cramsie inspired an international effort to learn his story and find his remains.  That path has been long and winding, with moments of joy, frustration and absolute wonder.  One of the highlights along that way was the founding of an Archive at Gainesville, Missouri to honor Bill Cramsie and those who served with him during World War II in the 416th Bomb Group.  That Archive, in the few years since its inception, has become a serious research center—collaborating in more than a dozen ongoing projects with professional researchers in Europe and the U.S.  Among these, several have produced significant journal articles and books in French, German and English that highlight the role of the 416th and share a vast array of documents and photos from the 416th Archive collection.  Of equal significance is the Archive's superb 416th.com website developed and maintained entirely by members of the extended 416th family.

A large part of the success enjoyed by this Archive, still in its infancy, is due to the sense of ownership that surviving veterans and the families of deceased veterans have in this not-for-profit facility.  Donations of original WWII records, photographs, letters, diaries and memorabilia of all sorts are literally pouring into the research center, as are offers of help from volunteers with exceptional backgrounds and dedication.  All of this activity has not gone unnoticed or unheralded.  At the 2016 reunion of 416th veterans, hosted by the Archive in Gainesville, Dr. Vernon L. Williams recognized the Archive and its founders with the East Anglia Air War Project's  George Bledsoe Preservation Award.  Dr. Williams is the Air War Project's Director and Professor of History at Abilene Christian University in Abilene, Texas. 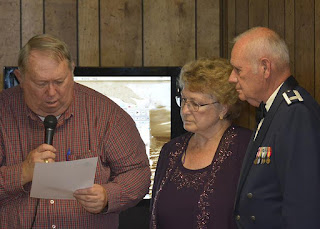 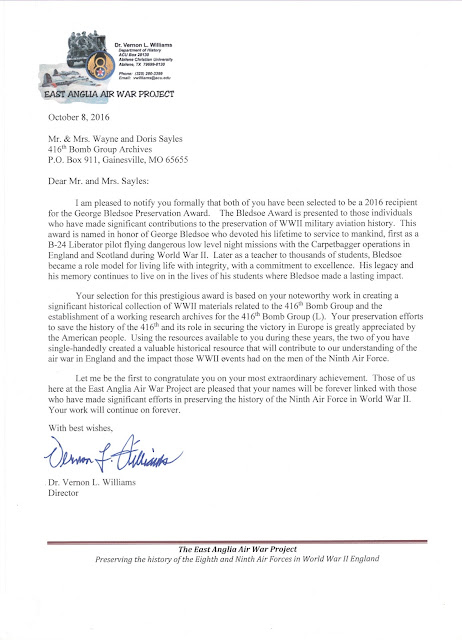 Author Anonymous — but everyone in the 416th Bomb Group family knows, or knew, at least one "Old Fart".

It's not a bad thing to be called an Old Fart.
Old Farts are easy to spot at sporting events; during the National Anthem, Old Farts remove their hats and stand at attention and sing without embarrassment. They know the words and believe in them.

Old Farts remember World War II, Normandy , Spitfires and Hitler. They remember the Atomic Bomb, Vietnam , the Korean War, the Cold War, the Moon Landing and all the Peacekeeping Missions along the way.

Old Farts hold the door for the next person and always, when walking, make certain the lady is on the inside for protection.  Old Farts get embarrassed if someone swears in front of women and children and they don't like any filthy language on TV.  Old Farts have moral courage and personal integrity. They seldom brag except about their children and grandchildren.

It's the Old Farts who know our great country is protected, not by politicians, but by the young men and women in the Air Force, Army, and Navy.

This country needs Old Farts with their work ethic, sense of responsibility, pride in their country and decent values.

We need them now more than ever.

Thank Goodness for Old Farts!  I was taught to respect my elders. It's just getting harder to find them.