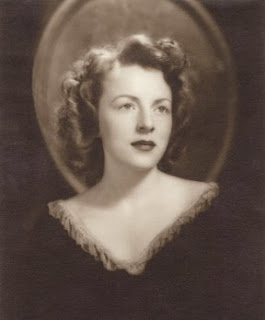 Dolloretta "Dee" Rogers and Bill Cramsie had met at West Point while Bill was an underclassman—in a rather unusual way according to her own telling. Dee had been talking with some upperclassmen, who were friends of her sister Kathleen, when Bill walked by. She asked the cadets she was with at the time who Bill was. They broke with the strict protocol of the day and called Bill over to introduce him. Dee and Bill apparently got along famously from the start. They spent time together at academy social functions and perhaps during rare passes when Bill could get into New York City. After graduation, Bill completed his flying training at Stewart Field in Newburgh, NY not very far north of West Point. There, he would have had considerably more freedom to get away occasionally. Bill was assigned to the 416th Bomb Group in September of 1943 and was transferred with that Group to England in January of 1944. The men of the 416th were sent to Camp Shanks, on the west bank of the Hudson across from Tarrytown, NY. While awaiting the formation of a convoy, Bill and Bob Basnett met Dee and her friend Clementine Smith on at least two, possibly three occasions in New York City. After the unit arrived in England, Bill and Dee remained in touch via V-mail. When Bill was declared Missing in Action, on April 10, 1944, Dee's letters to him were found among his personal effects. The squadron commander then wrote to her explaining what had happened. In a later V-mail from Clemie Smith to Bob Basnett, Clemie mentioned that she had seen Dee and wondered if there were any further word about Bill.

Several years after the war, Dee married John R. Cleary with Clemie Smith being one of the bridesmaids. The couple made their home in Detroit, Michigan—eventually moving to southern Florida. After searching for four years, I finally located Dee Rogers Cleary. Unfortunately, time had won the race. Dee was in a medical care facility and could not provide the countless details that I longed to hear. Through the gracious assistance of her son Jack and his wife Julie, enough details were gathered to confirm that this was indeed the Dee of my search. It was in the Fall of 2008 that I finished First to Fall and sent it to press. Dee was failing, but I immediately sent a copy of the book hoping that she could at least see what had come of this quest. As she neared death during the Christmas holidays, much of the book was read to her at her bedside by Julie. As often is the case in those closing days, one's memories clear and emotions return. Dee left us quietly on December 31, 2008. In relaying the sad news, Jack wrote that the book "brought back many happy memories to her of the time she spent getting to know Bill as well as her best friend Clemie Smith." That it brought joy and good memories to her at a trying time was a huge validation for me personally, making the many hours of research meaningful.

This morning, as I poured through two weeks accumulation of emails from being out of town, I came upon a message from Jack Cleary with the attached photo from his brother Tom that I've posted here. In all of the years that I had known of Dee, I had never seen a photo of her. As I sat before my computer, transfixed by the image, I knew instinctively that I had gotten it right.
Posted by F2F at 3:08 PM No comments:

My first contact with Edward (Ned) Burr came fairly early in my research about Bill Cramsie. Ned is the current president of the alumni of the West Point class of June 1943. He shared with me, by telephone, his memories of Bill and directed me to those who might still recall details from the three years they spent at the academy. In the process, I discovered much to my surprise that Ned and I have a common ancestral trail. Sarah Burr married my GGGG grandfather, Samuel Darling, in 1782, and they had a daughter name Esther who married Stephen Sayles. Ned and I connect a bit farther up the trail from Sarah. So, the DNA match is probably not too obvious. But it was fun nonetheless to find such a distant cousin.

Last weekend, I needed to travel to Washington DC on some business and Ned invited me to spend an evening with him and his charming wife Nikki. What a wonderful experience that turned out to be! Aside from the inevitable stories about West Point and WWII, I was enthralled with Nikki's memories of landing a job at the New York Times and her later writing and publishing experiences. We enjoyed an exceptional dinner of Chicken Oscar at the local "Officer's Mess". I call it that lovingly (even though it was not) since practically everyone in the building was ex-military. The Burrs live in a beautifully appointed military retirement facility adjacent to Fort Belvoir, Virginia. The atmosphere is very "up-scale" and the dinner was prepared and served to perfection. I felt compelled to share with Ned and Nikki my experience at the Waldorf Hotel in New York City where Chicken Oscar originated. Each year, in early January, I travel to NYC for a business convention which is held on one of the upper floors of the Waldorf Hotel. In reading about Clemie Smith, I discovered that she and her sisters often played harp in the Starlight Room of the Waldorf—apparently the rage at that time. When, on my next trip, I went looking for that room I discovered very much to my surprise that it was the very room that I have been coming to for many years. A coincidence, no doubt, but only one of far too many that came along during the writing of First to Fall. It was easy for me, on my latest visit, to hear the sounds of laughter and the shuffle of New York's "upper crust" echoing from the walls.

Having schlepped my video equipment along on this trip to Washington, with the intention of capturing some of Ned's memories on tape, we spent about an hour and a half preserving for posterity some of the things that stand out in the mind of a young man at West Point. Ned is an animated and articulate speaker and I'm anxiously looking forward to editing these tapes because I know in advance that they are going to be very entertaining and informative.

The next morning, I had the pleasure of meeting Dutch Umlauf for breakfast. Dutch is also a member of the class of June 1943 and remembered both Cramsie and Bob Rooney well. I was stunned when he casually mentioned that Cramsie and Rooney were roommates at the academy. Nobody that I had previously spoken to could recall who Bill Cramsie's roommate was. From early on in the research process, I felt very much like there was a link between the two, but had no real evidence to make the connection. As in nearly every case along the way, this tidbit came unexpectedly and in the form of a revelation. I had already decided before meeting Dutch that I would be writing the story of Bob Rooney (another tragedy) as a sequel to First to Fall. How strange is that?
Posted by F2F at 11:44 AM No comments: