Walking on the stones

I was born in March of 1943, as Bill Cramsie was anxiously anticipating graduation from West Point and moving on to his life's dream — flying. Amidst the complex weave of human experience, Bill's life and mine first crossed in 2005 and have crossed so many times since that I've lost count. In March of this year, the day after celebrating my own birthday, I'll board a jetliner for England where I'll have the opportunity to briefly visit the base at Wethersfield where Bill spent his last days.

Touching an object related to another person can sometimes evoke powerful and mysterious feelings. Whether it be a grandmother's locket or a father's wartime military uniform, the tactile connection is very real and often metaphysical. So it was with Bill Cramsie's class ring when I first held it in my hand. I had the same feeling a couple years later as I sat in a train northbound from New York City to West Point. With Bill Cramsie's ring in hand, I felt that we were actually companions on this journey that he had made many times.

I have little doubt that Wethersfield, with Bill's ring in hand, will be one of those "thin places" for me, where the barrier between the present and the past is vulnerable. I plan also to visit the American Cemetery at Cambridge, where Bill's name is inscribed on the Wall of the Missing. As I stood before a similar wall at the Veterans Museum in Branson, MO last September, I had a very calming flush of emotion—different in a way than those more anxious moments with the ring and with West Point. Bill Cramsie's name is inscribed at Branson among those of all U.S. veterans killed during WWII. In reality, it is one of thousands upon thousands and is rarely, if ever, noticed. But as Tom Rickels, the nephew of Bill Cramsie, and I stood together before that simple inscription, it felt as though a calling had somehow been fulfilled. 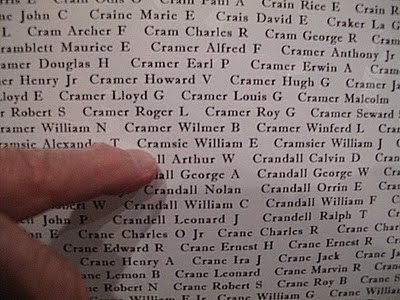 I had anticipated that the writing of First to Fall would be a final chapter for me in this extraordinary experience, but apparently not. The story continues to unfold and the opportunity to walk on the stones that Bill Cramsie walked on merely fanned the flame.