April 10, 1944 was perhaps not exceptional in the wider course of human events, but it was a day of huge loss and great tragedy for the 416th Bomb Group.  What should have been a routine mission to wipe out a V-1 Buzz Bomb site in northern France turned into a nightmare for the 36 ships and crews that participated.  Two crews were lost and never recovered.  Their names are engraved on the Wall of the Missing at Madingley Cemetery (the American Battlefield Monuments Commission cemetery near Cambridge, England).

Virtually every A-20 Havoc participating in that mission received battle damage due to the intense flak encountered in three deadly passes over the target at Bois des Huit Rues.

Bill Cramsie is of course the subject of this blog and of the biography First to Fall.  I have no doubt in my mind that he would object to being singled out for distinction today.  Every comment that I have ever read or heard about Bill reveals a person of genuine humility and loyalty.  He was also a person of intense dedication with a strong sense of duty.

Recently, I received a photograph from Francis J. Cachat that I'm pleased to share here.  Fran was the 416th Bomb Group photographer at RAF Wethersfield during the time that Bill was there.  Easter fell on the 9th of April in 1944 and Fran photographed Easter Mass at the Catholic Chapel on base.  Like many of the buildings of that period, the chapel was a large Nissen shelter, known commonly to Americans as a "Quonset Hut".  In Fran's photo, Bill Cramsie kneels before the altar receiving communion from Chaplain Penticoff.  It seems a fitting prelude for this devout Irish Catholic's impending trials only a day later. 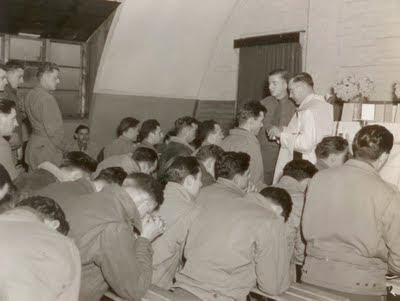 Today, it is fitting that we remember the life and devotion of William Edward Cramsie and those fellow members of the 416th that fell victim to the guns of Bois des Huit Rues.  It is a very small act on our part to recognize the sacrifice that they and their families made in the cause of a free world.
Posted by F2F at 12:08 PM No comments: