On this Veteran's Day 2009 there are good wishes and heartfelt thanks pouring across America, but none struck me more poignantly than the one that follows here. It came as a "pass it on" email and caught my eye when I saw the name Chuck Yeager in the subject line. I have long admired General Yeager, not only for his accomplishments but for his candid, often frontal, communications. Everyone who has any interest in military aviation knows the story of Chuck Yeager. He was already a hero when I was a young boy. It's like the old Smith-Barney commercial, when he speaks, everyone listens. I had the good fortune to meet Chuck Yeager in 1973, though it did not seem like good fortune at the time.

I enlisted in the Air Force right after graduating from High School. My dream was to attend the Air Force Academy, but I wasn't smart enough to realize that one achieves that kind of goal through years of preparation. The competitive exam for a Congressional appointment was a real wake-up call. I must admit that my academic career at Horicon High School was less than stellar. However, I seemed to make up for lack of foresight with dogged determination and after ten years of reaching for that brass ring I managed to earn a bachelors degree and the brown bars of a Second Lieutenant through the Air Force's Bootstrap Commissioning Program. In May of 1972, I officially became a "Mustang", as we late-bloomers are often called. I was a relatively mature "2nd Louie" and by early 1973 was assigned to the position of Commander of the 2081st Communications Squadron at Goodfellow AFB, Texas. I had only been in the office a couple weeks when the base was hit with a no-notice IG inspection from the Air Force Inspector General himself. Yes, it was then Brigadier General Chuck Yeager. At the end of a grueling week, General Yeager had all of the middle and top level managers on the base assembled for an out-briefing. He personally took the stage to inform us that the most impressive thing he and his team had seen at Goodfellow was the base dump. It was a very long and very quiet session that followed. I was a little shell-shocked, but what that experience imprinted on me was the singular message that "good enough for government work" is not a tenable position. The lesson that General Yeager left on the table served me, and I think the Air Force, very well in the years that followed. It is probably a bit ironic (or perhaps poetic justice) that this happened in my first assignment as an officer and my final assignment before retiring was as an inspector and Team Chief on the Inspector General's team.
Today, General Yeager (one of those heroes among us) has shared another important lesson. We must all remember those who have served—be they comrades, neighbors, loved ones or just someone passing in uniform. Below is the email from General Yeager in which he details an experience that personally touches me and is worth "passing on". 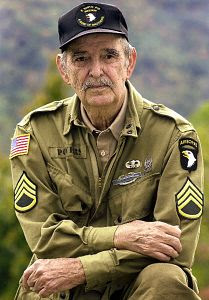 Shifty volunteered for the airborne in WWII and served with Easy Company of the 506th Parachute Infantry Regiment, part of the 101st Airborne Infantry. If you've seen Band of Brothers on HBO or the History Channel, you know Shifty. His character appears in all 10 episodes, and Shifty himself is interviewed in several of them.
I met Shifty in the Philadelphia airport several years ago. I didn't know who he was at the time. I just saw an elderly gentleman having trouble reading his ticket. I offered to help, assured him that he was at the right gate, and noticed the "Screaming Eagle," the symbol of the 101st Airborne, on his hat.
Making conversation, I asked him if he'd been in the 101st Airborne or if his son was serving. He said quietly that he had been in the 101st. I thanked him for his service, then asked him when he served, and how many jumps he made.
Quietly and humbly, he said "Well, I guess I signed up in 1941 or so, and was in until sometime in 1945 .. . . " at which point my heart skipped.
At that point, again, very humbly, he said "I made the 5 training jumps at Toccoa, and then jumped into Normandy . . . . do you know where Normandy is?" At this point my heart stopped.
I told him "yes, I know exactly where Normandy is, and I know what D-Day was." At that point he said "I also made a second jump into Holland, into Arnhem ." I was standing with a genuine war hero . . . . and then I realized that it was June, just after the anniversary of D-Day.. 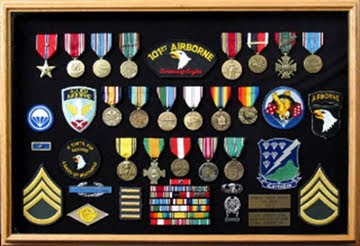 I asked Shifty if he was on his way back from France , and he said "Yes. And it's real sad because, these days, so few of the guys are left, and those that are, lots of them can't make the trip." My heart was in my throat and I didn't know what to say.
I helped Shifty get onto the plane and then realized he was back in Coach while I was in First Class. I sent the flight attendant back to get him and said that I wanted to switch seats. When Shifty came forward, I got up out of the seat and told him I wanted him to have it, that I'd take his in coach.
He said "No, son, you enjoy that seat. Just knowing that there are still some who remember what we did and who still care is enough to make an old man very happy." His eyes were filling up as he said it. And mine are brimming up now as I write this.
Shifty died on June 17, 2009 after fighting cancer.

There was no parade.
No big event in Staples Center .
No wall to wall back to back 24x7 news coverage.
No weeping fans on television.
And that's not right.
Let's give Shifty his own Memorial Service, online, in our own quiet way. Please forward this email to everyone you know. Especially to the veterans.
Rest in peace, Shifty.
Chuck Yeager, MajGen. [ret.]
Posted by F2F at 8:34 AM No comments: